Gear adaptive stepless transfer implements the science discovery of Professor K.S. Ivanov “Effect of Force Adaptation in Mechanics”: in the mechanism with two degrees of freedom the closed contour provides the adaptation of output shaft to the variable moment of resistance at the expense of change of its speed of rotation.

Research-and-production association “Gear continuously variable transmission —  CVT” (RPA CVT) carries out the fundamental and applied researches in the field of search of new effects in mechanic and creates the essentially new gearings.

The RPA CVT have been developed the theory of adaptive gears which possess property to be independently adapted for variable load (without a control system), have been designed, created and tested the gear continuously variable transmissions of machines. Results of probes have been reported at numerous scientific forums, published in the press and have been supported by international innovative patents.

The RPA CVT machine-building manufacture base is determined by the contract on cooperation of next enterprises: Institute of Mechanics and Machine Sciences of Kazakhstan, Almaty University of Power Engineering and Telecommunications, East-Kazakhstan State University and Almaty Machine-Building Plant.

The Gear CVT is intended for motion transfer on working shaft of machine with variable technological resistance. Gear CVT provides rotation of output shaft with speed which depends on loading in the smooth diapason of transfer ratios. Mechanism of transmission contains toothed wheels with constant engagement. The mechanism works without a switching of transfers. The gear CVT (or adaptive-mechanical transmission) is created on discovery of Professor Ivanov K.S. «Effect of force adaptation in mechanics». According to this discovery a mechanism with a closed contour containing toothed wheels provides adjusting or adaptation to variable loading.

Offered continuously variable transmission is adaptive mechanical transmission. It contains only an adaptive wheelwork and has the extremely simple design. 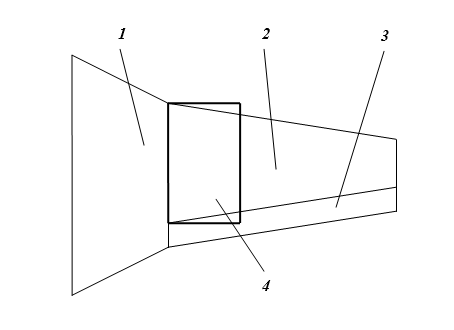 On fig. 1 the hydro mechanical transmission which has been using now is shown by thin lines.

2. Fixed-ratio transmission with 4th or 5th stages of toothed wheels.

The adaptive-mechanical transmission which does not have analogues in world practice is shown by thick lines. It contains only an adaptive wheelwork 4 — the self-regulated mechanism without any control system.

The discovery of effect of force adaptation in the mechanics is a theoretical basis of creation of essentially new self-controlled transmission with constant cogging of toothed wheels.

The adaptive mechanical continuously variable transmission represents the closed toothed differential mechanism with two degrees of freedom. The toothed differential mechanism having the closed contour with toothed wheels is capable to impose additional constraint on motion of links. Definability of motion of the gearing is theoretically proved at start-up regime (in a condition with one degree of freedom) and in operating regime of motion. The transmission provides also stop regime when a rotation of input shaft and stop of the output shaft takes place.

The find regularities are allow executing geometrical and dynamic synthesis of transmission on the set diapason of transfer ratios.

Numbers of teeth of wheels

is variable and it is corresponding to external loading. 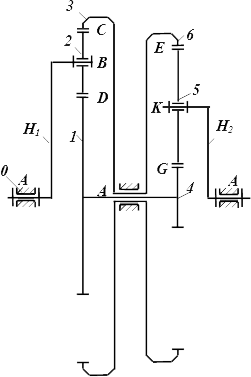 The input driving moment is equal to output moment of resistance

. The increase of output moment of resistance leads to decrease of angular speed of output carrier

at invariable input angular speed of input carrier. By this the balance of power remains

Diapason of change of transfer ratio

Connection between force parameters and kinematic parameters of transmission is defined by the following theorem:

Mobile closed four links contour in the kinematic chain imposes a constraint on motion of links of this chain. This constraint leads to equilibrium on principle of virtual works

at the constant input power

Equation (2) defines effect of force adaptation of the mechanism. This effect is leading to change of speed of rotation of the output shaft depending on loading on it.

Efficiency of the adaptive gear variator

Thus, efficiency of mechanical adaptive transfer functionally does not depend on external loading and matches to efficiency of the planet gear. At the moment of qualitative change of structure of a variator at a stop of a output link of efficiency instantly gets a zero value.

— a useful power on output carrier

— The spent power on input carrier

The adaptive gearing (fig. 2) represents a gear planetary variator which depending on the enclosed loading can move with one or with two degree of freedom. Efficiency of adaptive transfer depends on a motion regime.

In this case the closed contour which is switching on toothed wheels 1, 2, 3, 6, 5, 4, moves as a single whole without relative mobility of toothed wheels in a contour. A friction loss occurs only in two rotational kinematic couples

, connecting the input and output carriers with a rack. Therefore

The adaptive gearing moves with two degree of freedom, if output moment of resistance more than the input driving moment

In this case there is an internal relative motion of wheels 1, 2, 3, 6, 5, 4 in the closed contour. A friction loss occurs not only in two rotational kinematic couples

, connecting the input and output carriers with a rack, but also in a contour containing 4 rotational kinematic couples (type

— gearing of teeth of wheels). Therefore

— efficiency of the higher kinematic couple of type

Practical implementation is including the next:

2. On fig. 3 the assembly drawing of adaptive mechanical transmission of the conveyor drive is presented. 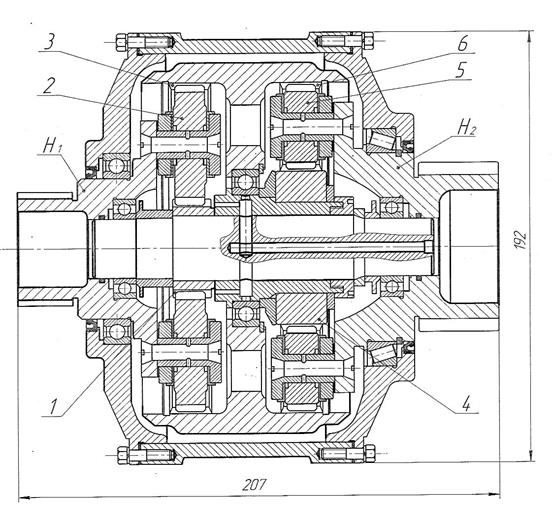 3. Computer animation of adaptive mechanical transmission is presented on the site http://www.madbass.narod.ru and on fig. 4. It shows motion of links at change of external loading. The animation model contains electric motor (of grey color at the left), transmission without the case (input carrier with input satellite of green color, block of solar wheels of red color, block of ring wheels of dark blue color and output satellite of green color with output carrier) and brake (of red color at the right) which is simulating an output moment of resistance. The electric motor has constant parameters of power (angular speed and driving moment). The brake creates a variable moment of resistance. When the output moment of resistance is increasing then the output carrier rotation is decreasing and on the contrary. 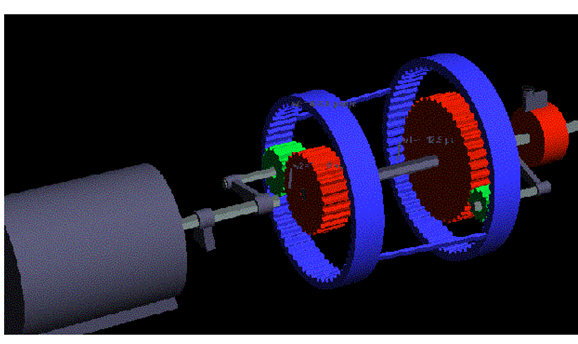 4. Acting pattern of adaptive mechanical transmission (fig. 5). The pattern is confirming the presence of force adaptation in a wheelwork with the closed contour. 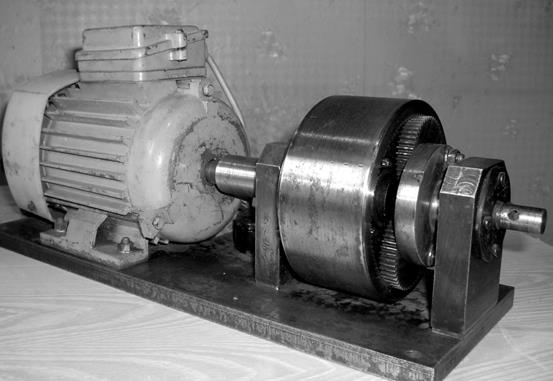 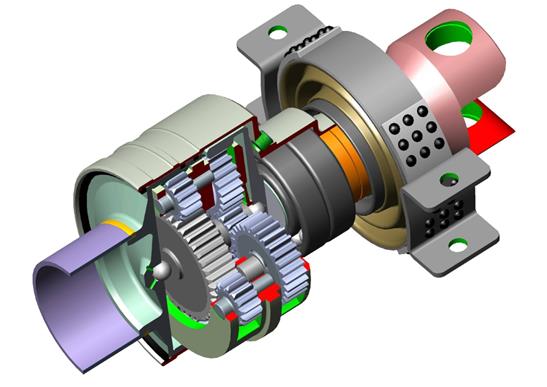 Stock-taking of effect of power adaptation in stepless adjustable transfer has been executed on the test-bed (fig. 7). 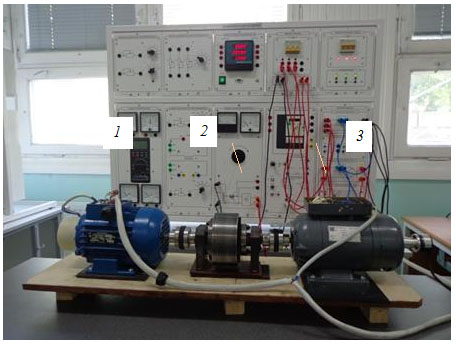 On fig. 8 the experimental tractive characteristic of a gear adaptive variator in the form of the schedule of change of the traction moment on output shaft in Nm is presented depending on speed of its twirl in rpm.

The traction moment on output shaft of the mechanism in operating regime of motion is equal to a variable moment of resistance.

and the operating regime of motion — curve

) in a condition with one degree of freedom as a single whole. The internal relative motion of wheels in the closed contour is absent. The mechanism output shaft is twirled with rated speed of twirl of the shaft of the electric motor. In point 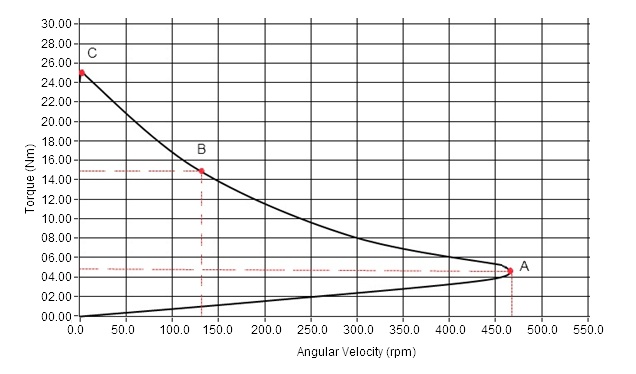 — motion in a condition with one degree of freedom in the absence of internal mobility in a contour,

— the operating conditions end (the maximum moment of resistance and a stop).

Fig. 8. An experimental tractive characteristic of the gear adaptive mechanism

The operating regime of motion begins in point

. In this case the mechanism passes in a condition with two degree of freedom. There is a power adaptation. The output shaft rotational speed independently changes in inverse relationship from a moment of resistance. The input moment and an input rotational speed remain without change. They are equal to matching nominal values of parameters  of the electric motor.

For example, in point

The maximum traction moment on the output shaft occurs in point

. The maximum traction moment is equal In this point to maximum moment of resistance

. The output shaft rotational speed at the approach to point

, and then in point

occurs a stop of the output shaft of mechanism

. The input shaft continues to be twirled with rated speed of twirl of electric motor

. The mechanism passes in a condition with one degree of freedom when the input shaft is twirled and the output shaft is stopped. The so-called stop — regime occurs.

Creation of gear adaptive mechanical transmission in the form of closed gear differential mechanism with two degrees of freedom is theoretically proved.